Abstract: This research is devoted to the study of the impact of anthropogenic activity on the stability of the population and its properties. Since factors, such as a decrease in the feed base, based on fish catching and birds shooting, have a significant impact on the existence of the population.
The relevance of the work is that at this moment intensive fisheries are being carried out and as a result of excessive catch, the ecosystem is declining. Often, this negatively affects on the food chain [5], mainly birds, being their main food base. Thus, one of the solutions in assessing this impact and predicting population dynamics can be the population viability analysis [1, 4].
The aim of the study is to simulate the viability of a population and assess the impact of the abundance of one species on the viability of the other, taking into account the negative factors.
The practical approach of this research is that with the help of the developed scenario we can monitor the viability of the population and the probability of its extinction [2]. This can be useful when decisions are needed to restore the population, to compare proposed ecosystem management options and assess the current situation.
The main results of this work are scenarios, that was modeled, in which two negative factors impacts on the population of birds: Phalacrocorax carbo shooting and fish catching. As a result of the forecast of the existence of the Phalacrocorax carbo, it can be seen that the stable functioning of the population is possible only if two important environmental requirements are met, which are presented to users operating in the Azov-Black Sea coast. These requirements include both regulation of the fence hunting and hunting by the hunters of the investigated object

Phalacrocorax carbo are widespread on the Azov-Black Sea coast. They eat fish, mostly commercial, and in significant quantities. For a day each bird eats up to 2 kg of fish. However, the Phalacrocorax carbo is useful as an ambulance, since he is a biological impasse for all helminth diseases of fish. They catch primarily diseased fish, which is much easier to catch, and digest it along with its parasites.

In the last 10-15 years in the Azov-Black Sea region there has been a rapid increase in the number of large Phalacrocorax carbo that began locally in individual colonies of the Azovo-Black Sea region from 1975-1980, and from 1985-1989 and acquired the character of an «explosion».

Important is the impact of birds on ecosystems through excrement, with which nutrients and energy return to water bodies and land. Eating a day about 350-500 grams of fish, the Phalacrocorax carbo releases 56.4-60.9 grams of excrement with a moisture content of 7.5%. On land Phalacrocorax carbo leave 10-25% excrement. Dry feces of fish-eating birds contain 17% of mineral salts, of which phosphates — 7%, sulfates — 3.2%, ammonium derivatives — 1.8%, chlorides in combination with potassium, sodium, magnesium catholytes — 0.35% [7]. The soluble fraction consists of organic substances (83%), which contain phosphorus — 5% and nitrogen — 15.5%, as well as nucleic acids, amino acids, peptides, creatine, carbohydrates, vitamin B12, etc.

Phalacrocorax carbo are numerous only in areas with the highest biological productivity of water bodies. Their impact on commercial fish is largely offset by the consumption of weedy and low-value fish, which are active competitors of commercial species [6]. Ultimately, the role of these numerous large birds, tied throughout the life cycle to water bodies, is reduced to participation in the circulation of organic matter in them, without removing this substance, i.e. without reducing the potential for fish productivity of water bodies [3]. They do not significantly affect the abundance, reproduction and size of catches of commercial fish. Unreasoned destruction of biological chains by excluding fish-eating birds from them, without taking into account their importance in the biological balance, can lead to very undesirable results for the fishery. Phalacrocorax carbo can cause local damage to the fishing industry, destroying fish in small areas of water bodies or fish breeding ponds, only in a limited period of fish life (for example, in the period of the fall of the young). At this time there is a need to regulate their numbers or take other measures to protect valuable fish species from piscivorous birds.

The simulation was carried out using the Monte Carlo method and the PVA Vortex software. The program is an interactive simulation model [8]. It allows determining the probability that the population will exist a certain number of generations.

The PVA Vortex software uses population data, where the program monitors the population on an annual basis. The model time used in assessing the viability of the population varies from 10 to 500 years.

In this paper, an analysis was made for two populations — Mugil cephalus and Phalacrocorax carbo for the next 20 years.

For carrying out PVA, the parameters characterizing the analyzed species can be seen in Table 1. 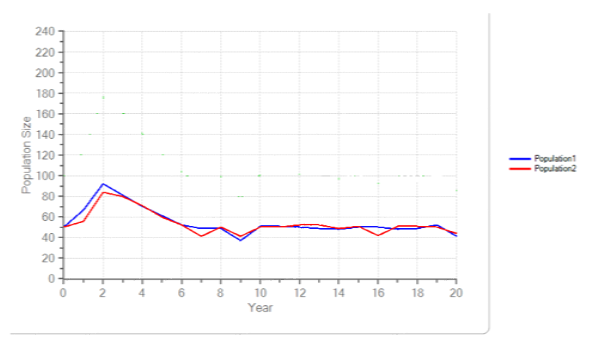 Figure 1. Scenario 1. The frequency of the accident is 0%, the deviation in the population is ~ 5% (seasonal fluctuations) — 20 years.

Next, two catastrophes are considered — catching fish by humans and shooting Phalacrocorax carbo s by hunters. The error in the calculations is 15%. We analyze how population sizes behave under the current situation (Fig. 1). Curves Population 1 — the number of fish, Population 2 — the number of birds. 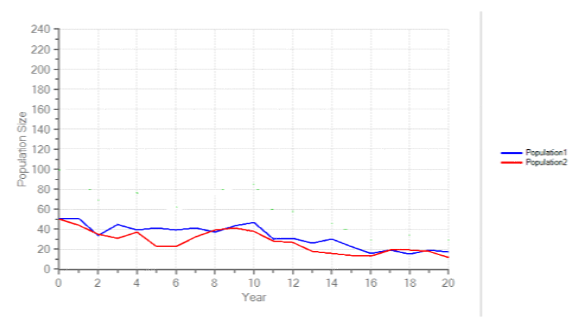 The graph above (Fig.2) shows two curves that characterize the density of the population for 20 years, taking into account existing disasters, the frequency of which is 33%. Population numbers were initially taken of 50 thousand individuals. Due to the catch of the forearm by humans, the fish population often decreases. In particular, the factor of direct reduction of the Phalacrocorax carbo population is considered — their shooting by hunters. This causes a lack of feed base and, as a consequence, a decrease in the bird population. As a result, population density is steadily declining during the model time, which can lead to negative consequences for populations.

Next, consider the dynamics of the number of populations with a disaster rate of 50% (Figure 3).

Thus, in this scenario, taking into account existing catastrophes, the fish population decreases and, accordingly, the Phalacrocorax carbo one gradually decreases over the course of 20 years and the negative changes leading to the disappearance of the population are clearly traced.

Thus, the application of the method of analysis of the viability of the population is a necessary tool for assessing the influence of the number of one species of a population on the viability of another species, showing the vector of its further development.

So, in the first scenario, the dynamics of populations remains on the same level for the next 20 years, while scenarios 2 and 3 clearly show negative changes that could lead to the disappearance of the population.

Therefore, we can conclude that the implementation of environmental measures to maintain the Phalacrocorax carbo by regulating the food supply is vital to preserve the existing population.