Review article
Abstract: In the Russian Federation, the development of oil and gas fields is carried out in oil-bearing provinces, located mainly in areas with severe climatic conditions. Currently, gas production, according to Rosstat, is carried out at 8658 wells, including in the Yamalo-Nenets Autonomous District -at 5995 wells, in the Tyumen Region – at 6017 wells, in the Republic of Crimea – at 104 wells, in the Krasnodar Territory – at 232 wells. According to the data Ministry of Energy of Russia for 2019, conducted at 180,400 wells, in 2019 7850 new oil production wells were commissioned in the Russian Federation. The total volume of exploration drilling in the country in 2019 reached 1,142. 3 thousand meters (1,142. 3 km), which is approximately equivalent to 800 exploration wells [1].
Keywords: oil production, drilling mud, highways, natural soils.

Looking at the maps of the distribution of minerals, it can be noted that most of the developed oil fields are located in Western Siberia and Tatarstan, while deposits in the Arctic zone and in the Arctic are actively studied and developed (Fig.1). 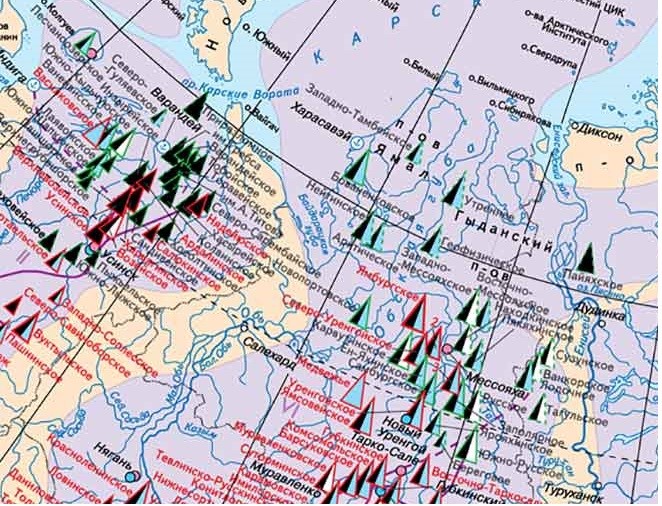 The most characteristic generalizing feature is permafrost (MMG), located under a layer of seasonal freezing-thawing. The stability and reliability of infrastructure facilities directly depend on the load-bearing capacity of MMG, which decreases with increasing temperature. Due to the degradation of the MMG, numerous problems have been identified and there are cases of partial or complete destruction of objects, while there is a danger for the most important infrastructure facilities in Russia.

The second reason is environmental. During the degradation of MMG, landslides, thermokarst subsidence develop, and the load-bearing capacity of highways, including highways serving oil fields, decreases (on average, according to our data, 1 oil well requires up to 30 trucks of standard load capacity 10-15 tons (KAMAZ) per day.

The third reason is the increase in greenhouse gas emissions, especially methane, during the melting of MMG, which can affect the carbon cycle and increase global temperature [10].

Drilling wells with the equipment of the drilled hole is a complex technological process and requires a significant amount of special drilling fluids. Waste solutions-oil sludge are formed both during the extraction of crude oil, and during its transportation and processing. On average, 1 thousand tons of crude oil «weighs» 5-7 tons of oil sludge [3].

Used for the treatment of drilling fluids and contained in the spent drilling mud, materials and reagents must have the toxicity indicators (MPC, MP, LD50, and others) agreed in accordance with the established procedure and the hazard class is not lower than the 3rd according to the current Federal classification catalog of waste [4].

The high humidity of drilling cuttings, mainly associated with the content of clay particles, which have a low filtration coefficient (less than 0.005 m / day) and a high water saturation coefficient (more than 0.75 cu), is the main cause of waterlogging of the area in the locations of sludge barns.

Existing technologies for the disposal of spent drilling sludge include the addition of cement or quicklime to the sludge accumulators to reduce the fluidity of the sludge. In the future, the spent sludge is selected from the storage tank and sent for disposal in accordance with the requirements of the supervisory environmental authorities. This technology, according to our calculations, leads to an increase in the cost of 1 ton of oil produced by 1.3-1.5 rubles. In this regard, there was a suggestion to use spent drilling cuttings for the construction of non-public roads (field roads). However, the use of drilling mud in its pure form in the construction of roads can lead to undesirable processes of changing the soil of the landscape (waterlogging), to eliminate the effect of waterlogging, it is necessary to mix the sludge with natural soils of sand fractions.

Based on previously developed technologies, it was proposed to use spent drilling mud mixed with local sands in the proportion of sludge: sand from 0.6:1 to 1:1 with a mixture of the resulting technogenic soil directly at the site of laying with a wheel-mounted recycler. After mixing, the soil is compacted with a dirt roller. After the initial compaction, a second pass of the recycler is carried out with the introduction of the resulting cement mixture into the composition. The resulting mixture is subjected to final compaction by analogy with conventional reinforced soils. To reduce the effect of precipitation on the water saturation of the surface layers, it is recommended to treat the surface with a bituminous emulsion or foamed bitumen.

During the construction of the pilot site at the Vostochno-Messoyakhskoye field, a mixture of soil and drilling mud was reinforced with cement or bitumen emulsion using the Wirtgen 2500 double-pass recycler method. The recycling depth of 40 cm (layers of 30 cm of natural soil and 10 cm of drilling mud pre-treated in the barn with cement), followed by the distribution of the binder (cement), leads to the fact that the toxic effect of water solutions of drilling mud is practically not manifested.

According to the preliminary results, a report is submitted to the Customer.