Review article
Abstract: The method of manufacturing shaping equipment for composite parts based on 3D plastic printing is considered. An overview of scientific works in the field of additive technologies application in production preparation is given. The design of additive shaping rigging is described. The advantages and possible problems of the proposed technology are discussed. Economic indicators of the milled and additive equipment are compared.
Keywords: 3D-printing, additive technologies, equipment, FDM

For the production of composite aircraft, a large amount of forming rigging is required. Its manufacture takes up a significant part of the costs in preparation for production. At present, the shaping rigging is manufactured on milling machines with numerical control. This approach makes it possible to reproduce with high accuracy the theoretical contours of the aircraft, however, due to the high costs of milling and material of the workpieces, significant investments are required.

It was proposed to use 3D printing with plastic to reproduce the theoretical contours of the aircraft [1]. In accordance with the proposed technology, the shaping equipment (or master model) is manufactured on a 3D printer using FDM technology. This approach can significantly reduce the cost of production preparation. On average, the cost of manufacturing a set of equipment for a light multipurpose aircraft can be reduced by 8 times [1].

It should be noted that experience has already been accumulated in the application of additive technologies for the production of rigging in foundry. The works [2, 3] consider the manufacture of rigging by photopolymerization (SLA technology) for molding thermoplastics. The work [4] considers the creation of sand-polymer molds by the method of selective layer-by-layer bonding for casting metals. The use of additive technologies in this industry has shown its high efficiency.

To use additive technologies in the field of pre-production of composite parts, a typical matrix design was developed. A typical design of a matrix made using 3D FDM printing is shown in Figure 1. 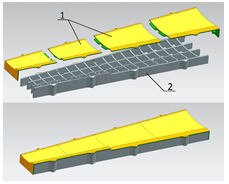 Figure 1. Typical design, matrix of the lower plating of the wing of a light aircraft

For more rational use of 3D printing, the rigging is divided into a forming part and a power frame. The shaping parts are made by 3D printing, the power frame is a rigid structure made of sheet material on a cutting machine, or according to templates. The load-bearing frame and the shaping surfaces are connected to each other using gap expansion joints and aligned along the reference planes.

The surface roughness is the main problem in 3D printing technology. For FDM technology, the minimum roughness of printed parts can reach a value of ≈Ra12 [5], and in high-performance modes — ≈Rz100. At the same time, the required roughness is Ra0.8 … Ra3.2. The surface of the printed parts can be finished by filling, followed by sanding or finishing milling. Also, a method for surface finishing by vacuum covering with a thermoplastic material was proposed. Thus, improving the surface roughness of printed parts using FDM technology remains an urgent issue in the production of rigging.

Also, for the successful use of additive technology, it is necessary to take into account the thermal deformations that occur during the 3D printing process. In work [6] it was shown that during 3D printing of large-sized objects at high-productivity modes, large internal stresses arise, which can lead to distortion of the shape and delamination of the part. Numerical simulation and geometry pre-compensation can significantly improve the accuracy and quality of printed parts. Methods of numerical modeling of 3D printing are considered in works [6,7,8]. An example with a mathematical algorithm for compensation of a known deformation is considered in [9].

To assess the effectiveness of the proposed technology, the costs of manufacturing rigging by milling and 3D printing were compared. The rigging cost estimate includes the cost of consumables and the cost of equipment operation, since the costs of other components remain approximately the same for both technologies. For convenience, the costs were reduced to the cost of 1m2 of the forming surface. The results of calculating the cost of equipment for a light multipurpose full-composite aircraft are presented in Table 1. The data on the cost of model plastic for milled equipment and plastic for 3D printing are taken from open sources. The cost of operating the equipment was calculated based on a depreciation period of 4 years and energy consumption.

Comparison of technologies for the manufacture of rigging

Thus, the use of 3D printing FDM technology in the manufacture of shaping rigging will reduce the cost of rigging by ≈8 times and the time for its manufacture by 2.5…3 times. Reducing pre-production costs will be especially important for the creation of single aircraft demonstrators of technologies and experimental aircraft, as well as for organizations with a small budget, such as student design bureaus. The use of the proposed technology for the preparation of the production of composite aircraft will allow a larger number of teams to implement their ideas and increase the speed of development of the aircraft industry, in particular light aviation.