Abstract: Various impacts of landslides have increased in past decades due to the rapid growth of urbanization in the developing world. Landslide effects have damaged many aspects of human life and the natural environment, and many difficulties remain for accurate assessments and evaluations. Main goal of this article is to analyze main topographical factors of Kerch peninsula and describe impact if this factors on landslide process. Factor, analyzed in this work include slope, steam power index, profile and plan curvature, mass balance index and terrain wetness index. The most important factor, that influenced on landslide processes is slope angles.
Keywords: Toporgaphy, Kerch peninsula, Landslides, GIS, Spatial analysis

From the point of view of relief-forming factors, it is important to consider the morphometric indices of the relief of the Kerch Peninsula [7]. These include: 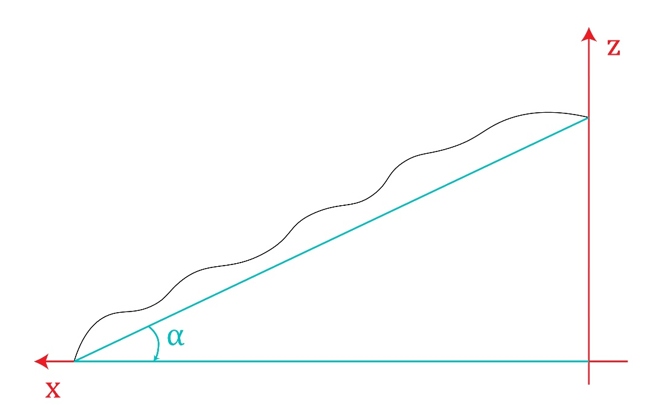 The determination of the slope angle of the surface according to the Zevenbergen-Thorn algorithm [17] is calculated by the formula 1:

where z (2 … 8) — elevation indicators for certain raster cells, l — distance between individual height elements (spatial resolution of the raster). In this case, the units of absolute height and spatial resolution are equal to each other and as a rule are measured in meters.

For flat areas, such as territory of the Kerch Peninsula, V. Zhuchkova and E. Rakovskaya [1] proposed a classification of gradations of the surface slope (Table 1).

The slope of the surface is a fundamental geomorphic parameter that is naturally associated with the following processes and landscape characteristics [7, 10]:

Figure 2. Steepness of the slopes of the Kerch Peninsula

Distribution by area occurred as follows in Table 2.

Distribution of different classes of slopes steepness over the area

The largest area of the Kerch Peninsulas territory is occupied by sloppy slopes and strongly sloping slopes, having an area of 622 and 571 km2, respectively. Concerning the slopes on which there is the greatest probability of formation of landslides, their area is about 107 km2 and geographically they are located in the eastern part of the peninsula.

An important factor in the formation of landslides is a destructive effect of the underlying soil composition of atmospheric precipitation [2, 3]. With abundant deposition on the surface, short-term watercourses are formed, which lead to significant erosion processes, changes in soil composition and favorable conditions for the formation of landslides on the territory [6, 14].

The steam power index (SPI) is calculated by the formula 2.

where CA is the catchment area, G is the steepness of the slope.

In its essence, the flux power index is a measure of the potential erosive force of surface currents, i. e. the larger the catchment area and the slope, the greater the value of the SPI. Thus, the greater the volume of water entering a certain point of the surface from the areas above it and the higher the speed of these flows, the higher the probability of erosion processes.

SPI is used to describe the potential flow erosion at a given point on the topographic surface. If the catchment area and the slope angle increase, the amount of water falling on flat surfaces and the flow rate will increase, which will lead to an increase in flow capacity and intensification of erosion processes[4].

SPI rate depends on the erosion potential of the streams, the thickness of the soil horizons, the organic substances contained, the acidity of the soils, the content of silt and sand, and the nature of the vegetation cover.

Since the SPI depends on the slope, it is, as it were, its consequence in the part of the formation of the potential flow erosion parameter [9]. 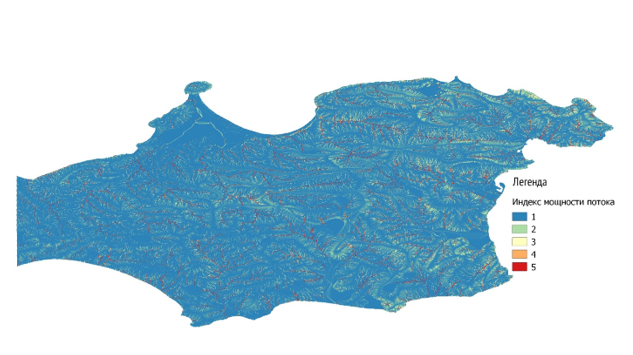 Erosion processes on the territory of the Kerch Peninsula, which depend of atmospheric precipitation, are rather poorly developed.

According to the table 2 territories, largely affected by this process have an area of 31 km2 or 1% of the total territory, which together with the fact that the level of precipitation on the Kerch Peninsula is very low, indicates a weak contribution of this factor to landslides process.

Plan curvature is the curvature of the line formed by the intersection of the earth’s surface and the vertical plane. Being a derivative of the second order, it describes the gradient of the slope along a given contour [5, 12].

Plan curvature has a significant effect on the acceleration or deceleration of the flow across the entire surface. When the water flow accelerates, the amount of accumulated precipitation in the lower part of the slope increases, which leads to its considerable erosion.

Since vertical concave slopes lead to increased erosion processes, an increased level of erosion-type processes is observed on these slopes [16].

Profile curvature, along with plan curvature, indicates a more dynamic course of processes of sliding of rock masses in concave areas of slopes.

The cumulative measure of the curvature of the earth’s surface, which identifies its convex sections with positive values, and concave — negative regardless of direction.

The imposition of plan and profile curvature leads to an increase in the total curvature of the surface. At those points where this value is maximal and the facts of the formation of significant landslides are observed.

The topographic wetness index (TWI) is usually used to study the on-going hydrological processes. The TWI helps to determine the areas on which due to various circumstances there is a waterlogging of the soils. According to K. Ballerin, TWI is an index that is able to show regions that are saturated with water or have a potential for this [8, 15, 16].

The index is calculated by the formula 5.

where, a is the specific catchment area; β is the slope angle (in radians)

The topographical character of the terrain affects not only the soil moisture, but also can indirectly affect its pH. These indicators are crucial for vascular plants. Also, TWI index correlates well with the level of groundwater and soil pH.

To calculate the values of the index of the topographic moisture index we can use spatial data, namely the digital terrain model.

An important indicator that characterizes the possibility of forming landslides is the mass balance index (MBI).

It shows the prerequisites for the development of dangerous gravity processes in a certain area and reflects the possible violation of the destruction of ground masses. By this indicator it is possible to identify dangerous landslides.

Negative values MBI the areas of the territory at which the deposition processes take place, for example, depressions and valleys. Positive values ​​of MBI show erosion areas — convex slopes of hills. Values close to zero are confined to territories approximately equal to the level between erosion and sedimentation processes, which is characteristic of a flat terrain [11]. 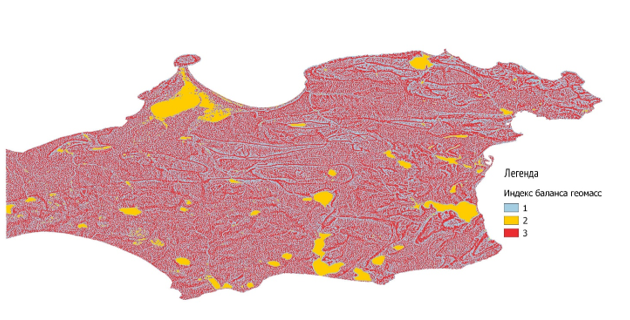 MBI can be calculated by formula 6.

where, S — the slope angle indicator, TC — the index of the total curvature of the surface, VDN — the catchment area.

Thus, it can be seen that the territory of the Kerch Peninsula has a rather heterogeneous relief. It is represented mainly by a weakly hilly terrain, for which a rather weak amount of precipitation is characteristic. The nature of the curvature shows that most spread types of territory are convex hilly regions. Potential areas where erosion can occur as a consequence of undermining precipitation is practically absent. This can significantly contribute to the active development of both erosion processes and landslides.

Most important factor for landslide process is slope angle. Territories with slope angles, that lead to landslides have an area about 450 km2 or 20% of the total area, that is a big value at all. That’s why morphometric parameters plays an important role in forming landslide territories in Kerch peninsula.