At present, educational programs at all levels, including primary school, are becoming more complex. Mastering more complex programs requires a higher level of formation of intellectual actions. At the beginning of the 21st century, numerous studies of the problems, methods and ways of teaching thinking were carried out.

A study by Adey, P. [2008] characterized thinking development programs for children aged 4–11 years. Dewey, J., & Bento, J. [2009 ] studied the results of a two-year program that activates thinking in elementary school students and noted an improvement in children’s cognitive abilities and social skills, as well as an increase in the professionalism of teachers. De Acedo Lizarraga et al. [2009] showed good opportunities for stimulating intelligence, abstract and deductive reasoning in accordance with the PAEA method.

McGuinness, C. with a group of researchers [2006] analyzed the use of various types of mental tasks to stimulate cognitive skills and identified the most effective ones. Trickey, S., & Topping, K. J. [2004] found that the Philosophy for Children elementary school program had a positive effect on the development of reasoning and argumentation skills in elementary school students.

Lucas, B., & Claxton, G. [2010] studied different types of intelligence (social, practical, strategic, intuitive, etc.) in younger students and identified effective practical tools for teachers in accordance with the noted types of intelligence. Nisbett, R. E et al [2012] have identified the characteristics of the relationship between intelligence and self-regulation, procedural memory and cognitive skills.

The study by Kuhn, D. [2009] shows the importance of children’s understanding of acquired knowledge for assessing learning outcomes. Shayer, M., & Adhami, M. [2007] demonstrated the effectiveness of developing cognitive skills in the study of mathematics. Swartz and McGuinness [2014] explored different possibilities for integrating thinking and academic learning. Puchta, H. and Williams, M. [2011] studied the development of 13 categories of cognitive skills (from simple to complex) in relation to the acquisition of significant practical language skills.

1.2. Brief description of the study

The content of the considered experimental works allows us to note that most researchers use educational material. We believe that it is possible to study the development of thinking and its stimulation on non-educational material. Such material creates favorable conditions for acquiring thinking skills, since, as our works [2004, 2003, 2015] have shown, knowledge of the curriculum does not determine the success of solving search non-standard problems (unlike solving educational problems). Underachieving children perform more confidently in solving such problems than in solving academic problems, because this new experience is not tainted by failure.

The purpose of the study was to study the conditions for the formation of intellectual actions in second-graders related to reasoning, comparison, planning and combination. Hypothesis: 32 lessons in the “Gumption” program are a condition for such formation. In our experiments [2004], it was shown that children, on their own or with little help, can solve simple variants of various types of tasks of the “Gumption” program (here it should be noted that the program under discussion was developed on the basis of our course of developmental activities for students in grades 1–4 “ Intellectika” [ 2002 ].

The study consisted of three stages. At the first stage, two groups of schoolchildren (control — 69, experimental — 73) solved search tasks to determine the degree of development of mental skills. The second stage included 32 lessons in the experimental group according to the » Gumption » program (one lesson per week). At the third stage, the children of both groups again solved the same search tasks.

Type 3, for example: “Edik and Leva are of different ages. In many years, Edik will be a little older than Leva is now. Which one is younger? »

Type 6, for example: “Dima and Katya had cubes with letters. First, Dima made up the word DOM. Then he moved the letters and got the word MOD. Katya first composed the word CAT, and then moved the letters in the same way as Dima. What word did Katya get?”

At each lesson, children solve 3 variants of tasks of the same type: 1) find the answer, 2) find the question, 3) find part of the conditions.

Option 3, for example: “Gena, Leva and Vova swam across the river. Gena swam faster than Leva. […]. Who swam the fastest?”

6 types of tasks for comparing schematic representations of objects have the following contents.

At each lesson, children solve 3 options for tasks for tasks of the same type: 1) find the answer, 2) find the question, 3) find part of the conditions.

Rule: one move is the movement of any letter to an empty space.

Rule: 1) one move is the movement of any letter to an empty space; 2) the same letters must be placed in the same way as the same numbers.

Rule: 1) one action is the mental movement of any letter to a free space; 2) the same letters as a result of two actions should be located in the same way as the same numbers.

Rule: one move is the simultaneous exchange of two letters.

Solution: PMK … RMB … KPM: first, the letters M and K are reversed, then the letters P and K.

At each lesson, children solve 3 variants of tasks of the same type: 1) find the answer, 2) find the final location, 3) find the initial location.

Below is the content of 9 types of tasks related to the movement of imaginary characters according to certain rules. 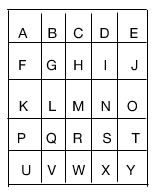 Rule: 1) “Chicken”, an imaginary character, moves through the letters in the “cells” of the “square”;    2)  the characteristics of its movements are: (a) it steps directly, i.e., into a neighboring cell vertically (e.g.: from M to H or to R) or horizontally (e.g.: from M to N or L); (b) it steps obliquely, i.e., diagonally,(e.g.: from M to G or I or S or Q); 3) duck can not make two identical steps (two direct steps or two oblique steps) in succession. Solution: K…L…R.

Rule: 1) “Cat”, an imaginary character, moves through the letters in the cells of the square; 2)  the characteristics of its movements are as follows: it jumps through the letter (e.g.: from M to F or B or D or J or T or X or V or P). Solution: K…V…S.

Option 2, for example: “Which cell did the duck get two steps from C: cell W or cell O?”

Option 3, for example: “From which cell did the duck get to Y in two steps: from cell X or K?”

The lesson on the program «Gumption» consists of three parts. In the first part (about 15 minutes), the teacher, together with the students, analyzes ways to solve a typical problem. Children need to understand what to look for in this type of problem and how it can be achieved. To do this, they are given the tools to analyze problems and ways to manage the search for solutions and control their actions.

In the second part (about 30 minutes), children independently solve 12 to 15 problems, applying the knowledge gained in the first part. In the third part (about 15 minutes), the teacher, together with the students, checks the solved problems and considers incorrect solutions, once again demonstrating the methods of problem analysis and ways to control mental activity.

Before and after 32 classes, group diagnostics were carried out on the basis of search tasks, in which it was necessary to find the movement of the «Postman» between the «houses» on the playing field (fig.3):

After explaining the Postman’s movement rule, it was proposed to solve six problems:

Quantitative characteristics of the success of solving diagnostic problems by second-graders are presented in the table.

According to the data presented in the table, the level of development of mental skills in May increased (compared to September) in both groups: by 11.6% in the control group, by 37.0% in the experimental group. In September, the difference was minimal — 2.7%, and in May it became statistically significant — 22.7% (at p <0.01). Thus, the conducted study confirmed the initial hypothesis that the “Gumption” program contributes to the formation of intellectual actions in second-graders.

The results obtained in the study are explained by the peculiarities of the content of the “Gumption” program: the non-educational content of tasks, their search nature, the variety of their types (plot-logical tasks, operational-logical, spatial, route), structural differences and differences in tasks: find an answer, find a question , find part of the condition.

4.2. Scientific significance of the study As a result of the experiments, new knowledge was obtained about the conditions for the formation of mental skills, expanding and clarifying the ideas of developmental psychology about the possibilities of intellectual development of younger students.

4.3. The influence of developmental activities.

Observations of the actions of students testified to changes in their behavior: they were no longer afraid of mistakes, offering their own solutions. Children who failed to solve all six diagnostic tasks in September initially showed increased anxiety, but subsequently gained more confidence and became more active in discussions.

When solving problems independently, these children were supported for eight lessons: the teacher reminded them of the rules for solving specific types of problems, indicated the elements of the conditions that must be taken into account, and helped them understand errors in incorrect solutions.

The students who solved all the problems in September were also supported: the teacher offered to compose problems similar to those solved. As our studies show [2003], [2016], such tasks contribute to the development of mental skills and creative thinking.

In conversations with teachers, it was noted that they made certain changes in their work. In particular, they began to offer more problems with incomplete conditions or missing questions, and also gave children problems that required verification of the finished solution. Speaking about changes in the behavior of students in the lessons according to the school curriculum, teachers noted the increased activity of children in class discussions, emphasizing the fact that children began to reason more consistently when solving mathematical problems and give more examples when studying grammar rules).

In September, on average, 21.8% of students solved six problems in both groups. With a different composition of the group, where the results were, for example, 15.0% or 10.0%, the effectiveness of developmental classes could be lower.

The pedagogical experience of the teachers who conducted the classes was, on average, 15-20 years, whereas if it had been 3-5 years, the development of the children in the experimental group would have been less effective.

Conduct a similar study with third-graders to more fully and accurately assess the impact of the «Gumption» program on the development of thinking skills in children of primary school age.

Determine the optimal composition of the search tasks for each age level of the «Gumption» program and check the effectiveness of other types of tasks.

To study new options for the frequency of developmental classes per month, as well as the duration of one lesson and its three parts. It is important to investigate the impact on the effectiveness of developmental activities of the number of children in the class, as well as their composition based on the results of the initial diagnosis.

Create a comprehensive program for the formation of intellectual activity among younger schoolchildren, in which the “Ingenuity” program would serve as propaedeutics in the course of the development of critical and creative thinking [2016].

The study demonstrated the effectiveness of the development of thinking skills in second-graders in group activities, when on a regular basis (once a week) for nine months (from September to May) various types of search tasks of non-educational content included in the “Gumption” program were solved.