Intellectual capital in the production function

Review article
Abstract: The paper studies the flow of innovation processes in the national economy. The analysis revealed that the recognized model of the production function takes into account only two main factors of production – labor and capital, which does not allow us to assess the role and significance of the innovation process in the development of the economic system. The paper has developed a modernized production function that takes into account changes in intellectual capital. and methodological approaches to accounting for factors that influence the development of the economic system. A model of the company's intellectual capital is proposed, and methodological approaches to its numerical assessment are developed.
Keywords: production function, investment in intellectual capital, innovation, technology, competence, innovation process, factors of production.

In accordance with economic theory and the main goal of the firm is to maximize profits, which is achieved by increasing the output of products (Samuelson, 1947 p. 26), for the production of which various resources are required. The dependence of output on resource expenditure is defined as a production function. The problem of economic growth, which in macroeconomics is defined as an increase in the production and consumption of goods and services (Schumpeter, 2007, p.28), is a fundamental problem of economic science, the solution of which depends on the well-being of members of society, the stability of the political system, and the country’s place in the world. The production function shows the possibility of increasing output if there is a certain amount or composition of resources, and also allows you to determine the optimal output for a different combination of factors of production.

In order to study and analyze the impact of various factors on output, several types of production function models have been developed:

where Y is the output volume, and xi is the number of different types of resources spent on production.

For quite a long time, economic science has been dominated by the hypothesis that two determining factors of production – labor and capital-are sufficient for the sustainable development of the economic system (Marx. 1957, p. 87). Based on this hypothesis, the Cobb-Douglas model of the production function adequately explained the relationship between output and resource expenditure:

where A is the proportionality coefficient, K, L is the amount of capital and labor, respectively, a is the capital elasticity coefficient, and b is the labor elasticity coefficient. The model fairly fully reflects extensive economic growth, when additional resources are needed to increase output, including capital allocated to expand production and labor. Jan Tinbergen in 1942 upgraded the Cobb-Douglas model by adding an element to the production function (2) that takes into account scientific and technological progress (Tinbergen. 1967, p. 45):

where r is the coefficient of elasticity of output, depending on the rate of scientific and technological progress, and e is the base of the natural logarithm.

Production function can take into account the time factor, in this case, the model goes into the category of dynamic and has the form:

where t is time, changes continuously.

Jan Tinbergen’s production function shows that the economic system can develop without attracting an adequate amount of capital and labor resources. Retiring, due to natural wear and tear, fixed assets of the enterprise are replaced by new, more productive equipment, which has a positive impact on output and is taken into account by the coefficient of elasticity r.

As you can see, the model assumes that scientific and technological progress has an unconditional and unavoidable positive impact on the final result of an enterprise, regardless of how and in what direction innovation processes take place. However, output is affected by factors that do not increase the amount of capital and the number of employees. These include:

— qualification of the company’s employees;

— new methods of promoting goods and services on the market, etc.

These factors are partially accounted for in the accounting on the intangible assets account and represent the intellectual capital of the enterprise. A number of theorists refer to the intellectual capital of an enterprise as the company’s trademark (brand), customer loyalty (Itami. 1987, p. 58), accumulated knowledge of employees, and other factors that can be classified based on the principles proposed by T. Stewart (Stuart, 2015. p. p. 2007-219).

The company’s organizational capital consists of a set of technological and production processes that take place at the enterprise, design and technical documentation, production management software systems, as well as patents, utility models, etc. Human capital is directly related to the employee of the enterprise and includes the qualifications, education, professional skills and competencies of the employee, his ability to develop and apply in practice the knowledge available to him. 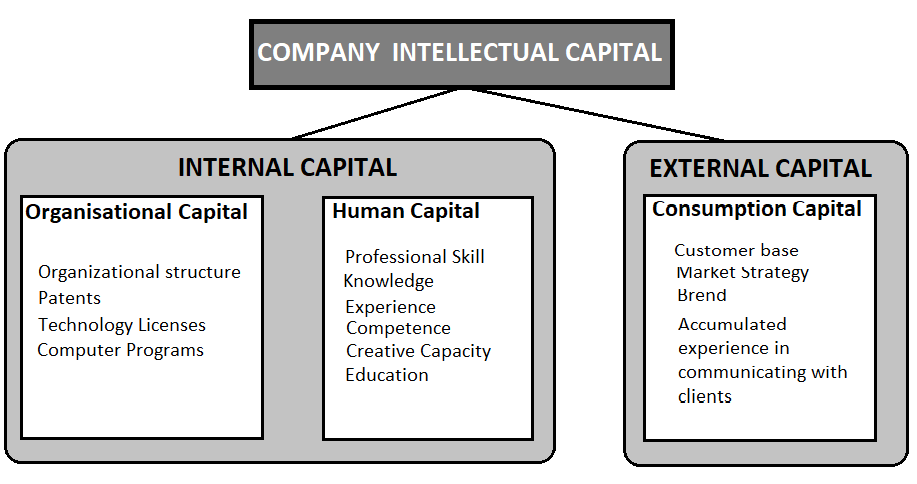 Despite the simplicity and adequacy of this model, its disadvantage can be considered some secondary importance attached to the quality of human capital in the production process. Assessment of the impact of the quality of human capital on economic growth was carried out in the works of R. Lucas and H. Uzawa — Lucas model, which proposed the following type of production function model (Lucas, 1988. p.p. 3-42):

where u — percentage of the population employed in manufacturing, h(t)-b —: external effect of the average level of education in the economy, a-elasticity of output by physical capital, H(t) — total stock of human capital

where     L(t) — the population is equal to labor resources in the economy, h(t) – the level of qualification of employees.

A special feature of the Uzawa-Lucas model is that it focuses mainly on human capital and pays great attention to education as the main quality criterion, but does not take into account other factors that may affect the output of products and services.

Currently, there are several approaches to the quantitative and qualitative assessment of human capital, including the following:

— at the macro level, the human capital development index is used, which is an integral indicator that takes into account life expectancy, gross domestic product per capita, level of education, culture, etc.;

— at the micro level of human capital of the enterprise is estimated as the sum of qualities of each employee including skills, education, experience, etc., although there is a view that this approach is not always acceptable since, with an appropriate labor organization in the enterprise observed synergistic effects [9]. The human capital of an enterprise can be estimated in monetary terms if we use the method of net value added proposed by F. Milost (Milost, 2014) in 2014 and the method of measuring the individual value of an employee (Kastryulina, 2013).

The analysis of various methods for assessing intellectual capital has shown that it is most appropriate to use a two-component model in which the key role is played by human capital to build a production function. The basis was taken from the Stewart model, which highlights human and information capital, including organizational and consumer components. Information capital of an enterprise includes not only business process models (Andreev, 2015, p.p. 130-135) [1], but also technologies, licenses, patents, customer base, information about suppliers and consumers, product range and characteristics, financial, economic and production system, etc. The expansion of digital technologies has created fundamentally new business models based on the use of a common platform for the exchange of products, services and information (Falco, 2019, p.p. 2-3) between enterprises, and therefore the role of intellectual capital in the development of high-tech enterprises in the domestic rocket and space industry will certainly increase.

Intellectual capital can be expressed as the sum of information and human capital in monetary terms.

The production function that takes into account the impact of intellectual capital on the output of products and services is as follows:

The model (9) has its own characteristics depending on the specialization, the number of products produced and the type of economic activity of the enterprise. Mass and large-scale production is characterized by a significant volume of products that saturate the market in a short period of time. At the same time, the technological process is quite intensive, which leads to wear and tear of special equipment, and therefore mass production enterprises have relatively frequent updates of fixed assets and products. As a rule, mass and large-scale production technologies involve automation of all processes, and therefore, the requirements for the qualification of workers are low, which gives the company’s managers the opportunity to quickly recruit and change personnel. the processes of updating fixed assets and labor are reflected in the model (9).

Enterprises of the domestic rocket and space industry of single and small-scale production are characterized by high qualification of specialists, high-precision universal equipment, a significant share of research and development costs in the cost of production, as a result of which the role of intellectual capital here will be much higher than in other industries. In the medium and short-term period, the number of jobs, wages and property complex of the enterprise undergo minor changes, which gives reason to accept the first part of the production function as a conditionally constant value:

where C — technological coefficient that takes into account the state of fixed capital and labor resources in the enterprise. The production function at single and small-scale enterprises will be as follows:

where α, β – coefficients of elasticity of output to changes in information and human capital, respectively.

The model shows that investments that are insignificant in comparison with the company’s fixed capital, aimed at improving the organization of production, developing new technologies, and updating software, can significantly affect product output. It should be noted that the process of introducing new technologies, software and other innovations will necessarily be accompanied by staff retraining, for which additional resources should be allocated. Investments aimed at improving the skills of employees, training staff, and creating more comfortable and safe working conditions will increase labor productivity and product quality. The funds invested in improving the efficiency of the remuneration system will increase wages and, consequently, the motivation of the most capable and promising employees of the enterprise. Investments in human capital will increase the level of competition in the labor market among potential employees of the enterprise, which will provide an opportunity to attract the most qualified specialists, workers and managers and, thereby, increase its cost.