Abstract: For the mantle rheology case the thermal viscous dissipation-driven thermal convection in the mantle wedge above the Amur Lithospheric Plate subducting under the Okhotsk Lithospheric Plate is modeled numerically. Within the framework of the model constructed the horizontal extent and localization of the 2D heat flux anomaly observed in the Okhotsk Sea eastward of the Sakhalin Island correspond to subduction velocity ~ 10 mm a year which is close to that observed with the geodetic means. For non-Newtonian rheology the model heat flux anomaly is ~ 130 mW×m–2 which fits well to the observed 2D heat flux anomaly. Rheological constants of the mantle wedge material are specified more accurately, the concentration of water in the mantle wedge being ~ 1 wt. %. The effects of the 410 km and 660 km phase transitions are taken into account. A comparison of the model scales and locations of convective flows in the mantle wedge for the cases of continental and oceanic types of Okhotsk Lithospheric Plate serves as the evidence in favor of the former (continental) type of Okhotsk Lithospheric Plate. Upwelling mantle wedge convective flow is indicated to be able to provide the mantle wedge calcareous-alkaline magmas transport to the Earth’s surface. The ascending convective movements in the mantle can take out mantle calcareous-alkaline magmas (with the metal ores which are contained in them) to the Earth’s surface, and, therefore, ore deposits probably have to be dated for zones of the raised heat flux, located over convective Karig flows.
Keywords: tectonic model, mantle wedge thermal convection, calcareous-alkaline magmas transport, subduction angle and velocity, mantle rheology, metal provinces. 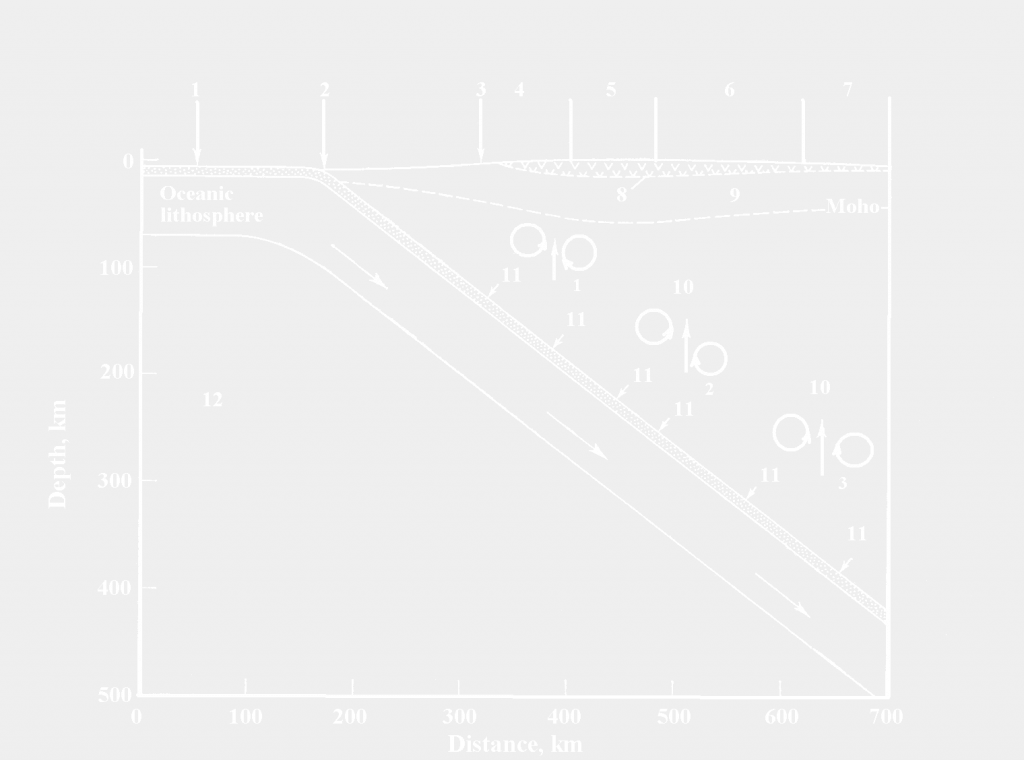 The purpose of this article is to try from the perspective of the concept of lithospheric plate tectonics [12; 14; 17] to explain the origin of some metal provinces of the Far East of the Eurasian plate. Except for the three main lithospheric plates in the Far East of North Asia, viz. the Eurasian, Pacific and North American ones, there are the following plates: the Amur, Okhotsk ones, the concept of the former of which (Amur) was for the first time grounded in [24].

The goal of the present research is modeling the convective mass- and dissipative heat transfer from the mantle wedge above the subducting Amur Lithospheric Plate to the Earth’s surface. Modeling of the localization and transversal horizontal extent of the 2D zone of anomalous heat flux at the Okhotsk seafloor eastward off the Sakhalin Island (as well as of the heat flux maximum absolute value) allows reliable evidencing in support of the amplitude and eastern direction of the Amur Lithospheric Plate subduction velocity. The model constructed here indirectly confirms the non-Newtonian mantle rheology to predominate in the mantle wedge sufficiently saturated with water, extracted from a subducting lithospheric plate, increasingly compressed in the course of subduction.

According to [2; 4; 5], two types of dissipation-driven small-scale thermal convection in the mantle wedge are possible, viz. the 3D finger-like convective jets, raising to volcanic chain, and the 2D transversal Karig vortices [7], aligned perpendicularly to subduction. These two types of convection are shown to be spatially separated due to the pressure and temperature dependence of mantle effective viscosity, the Karig vortices, if any of them formed, being located behind the volcanic arc [2]. Since there is a  lack of unambiguous understanding of the plates subduction in the area of Sakhalin, the present modeling of distribution and absolute value of the anomalous heat flux from the Okhotsk seafloor is all the more important, as it may serve as a decisive argument favoring the eastward subduction of the Amur Lithospheric Plate. Numerical modeling of 2D mantle convection, occurring in the Karig vortices form and transporting dissipative heat, may allow judging about the mean water content in the mantle wedge as well as about the convective transport of mantle hydrocarbons to the Okhotsk seafloor. The model of convection presented here takes into account the temperature and pressure dependence of viscosity and fits best to observations in the case of non-Newtonian rheology for the mean water content of ~ 1 wt. % and subduction velocity of ~ 10 mm per year. In [23] such a great (and even several times greater) water content is indicated as possible to be observed in the transition zone of a mantle wedge.